The past two weeks, especially the second week, were a great learning experience, for I did two packages, one VO-SOT and anchored in only five days. It was all about coming in early and just getting it done. Needless to say, I learned some valuable lessons in the process; I feel as though writing, editing and wrapping around on three consecutive days really allowed me to develop a certain routine.

During the shoots for both of my packages that week, I once and for all learned that pre-production is absolutely vital. Every reporter has to double-check and triple-check the equipment. You need to have the mindset that something won’t work and really expect the unexpected. I learned the hard way when I realized that although I had the Lavalier microphone with me, I was missing the clip. Naturally, this had a negative effect on my audio, especially because people around the interviewee were talking. When I shot the boxing match, I didn’t have a lavaliere microphone with me at all. During the shoot at the memorial for Rift Fournier, I also struggled with the tripod, as I was given the wrong one, which was a lot different from the one we usually get.

Reporting from a memorial is not an ordinary task, but one that was a valuable experience nevertheless. It was certainly not easy to keep my emotions in check and focus on my job, because after all Rift and I knew each other. When asked to do a package on a funeral or a memorial, reporters should ask themselves if they can cope with those kinds of situations, especially if they knew the deceased person. There are some things every journalist should keep in mind: Don’t claim to understand the pain, be patient, forgo the facts, avoid exploitation, and be sensitive.

I’ve come to the conclusion that the best way to avoid errors, be it audio level being too high or too low or forgetting to white balance the camera, is to have a checklist and go through all the different steps to ensure you get the desired result. Especially when time is scarce and things become hectic, you have to maintain your composure and not lose sight of important things. Even if it takes a while, always white balance and balance the camera and get a critical focus.

My VO-SOT was about comedy magician and hypnotist Josh McVigar. For some reason, my camera wouldn’t white balance during the shoot, although it had worked outside Butler Hall just ten minutes earlier. I tried everything but couldn’t get it to work. Luckily, the shots turned out to be alright. It was definitely the most entertaining and fun shoot yet. 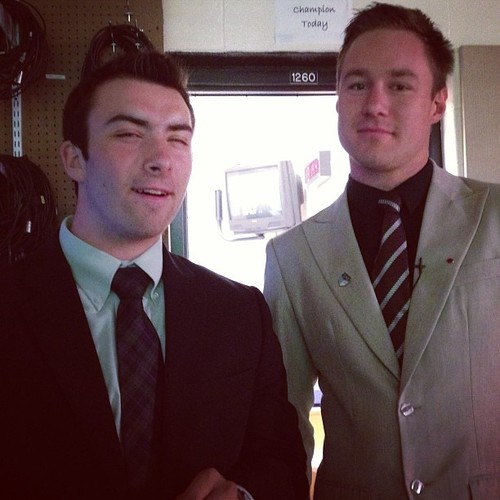 David Amelotti and I getting ready

One thing I need to improve is my interviewing skills. Especially when you are still an inexperienced reporter, it’s important to write down some questions and do some research prior to the interview, as it will make you feel more comfortable and confident. Interviewing is an art in itself and needs countless hours to be mastered. One certainly needs to be empathetic and a good listener.

I produced for the fourth time this week. By and large it was a decent newscast. I thought our new system worked well, because I knew exactly who I had at my disposal. It also made it easier for me to keep track of who is doing what. I think graphics-Ben is a great addition to the team, as he makes sound graphics and is able to work independently. I should have kept more of an eye on things like sports and weather and started proofreading stories sooner so that we could have printed the rundown and scripts sooner as well. People who are working on their packages should get in at least an hour before everybody else to have a head start. Running late with a package means extra stress and uncertainty for the producer and everybody involved. Plus, nobody knows if it’ll be ready in time. 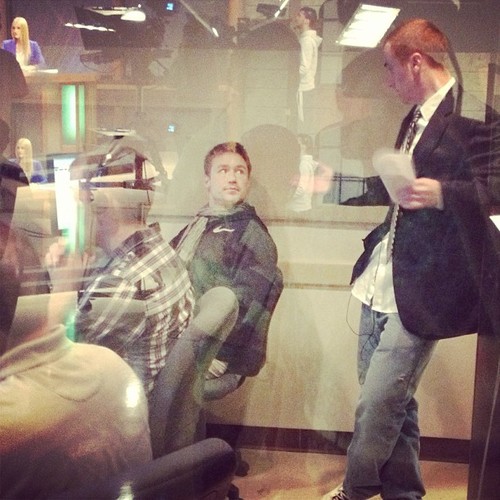 Next time I produce a newscast I will try to have a list of things I need to do which is not on the producer’s checklist to make sure I don’t forget about those kinds of things. Once again, I will look to sticking closer to the checklist and making sure that everybody is on the same page.

Tension in the newsroom is almost inevitable in a fast-paced working environment that revolves around meeting deadlines. It’s important to understand that occasional frustration and snappy answers are part of working for television. While you should try to remain calm and courteous at all times, sometimes raising your voice is the only way you can express that something is urgent or to get something done. One should never take it personally and in case it bothers you until after the newscast, you should talk to the person once the stress has subsided. 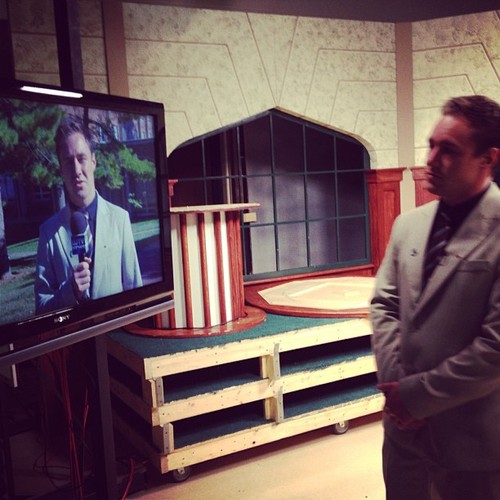 Watching my own package run during the newscast

My fourth time anchoring went well. I thought I had good presence and spoke with authority. The interaction with David Schlaeger felt natural and reading each story out loud at least once proved to be of great help once again. The teleprompter seems to be getting better as the semester progresses, which makes the anchors’ life a lot easier.